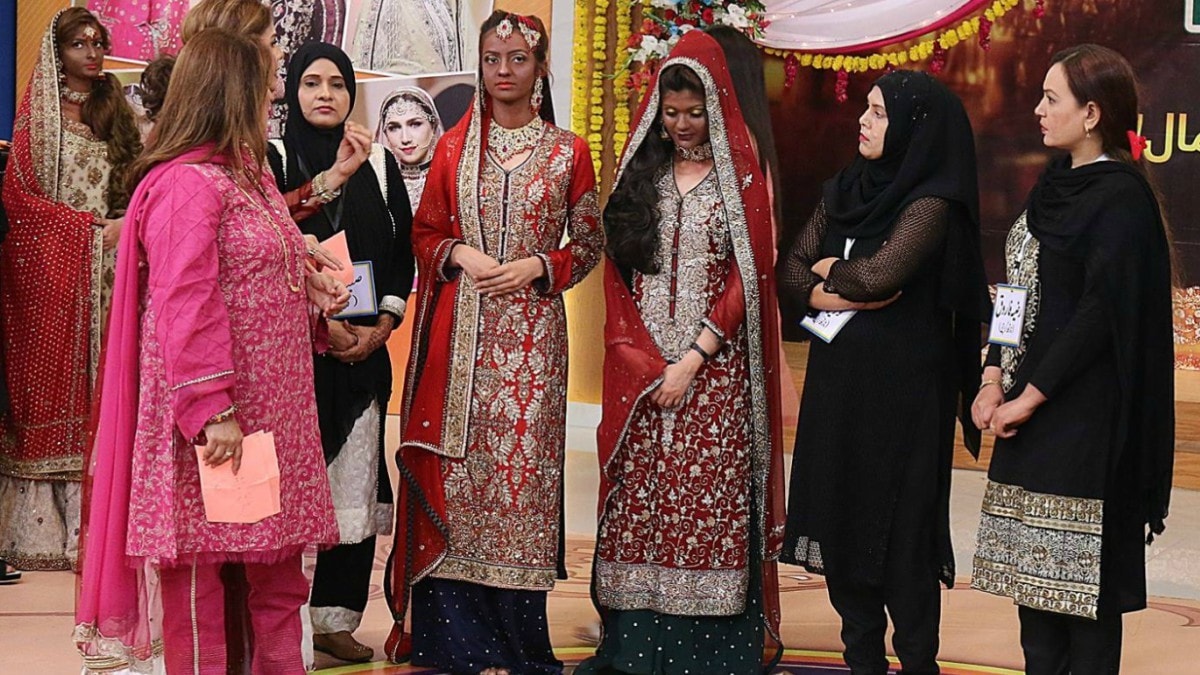 Gone are the days when morning shows in Pakistan made any sense. The Tarar hosted elegant and informative show is a thing of the past and by looking at the current situation we don’t see anything like that coming anytime soon. As if there weren’t enough social issues in Pakistan, now, underlying racism is one of them.

Today, the morning shows are nothing but just 3-hour long useless consumption of airtime with a stupid over-dressed host who keeps talking gibberish and nonsensical stuff in the entire show.

Because of their weird nature, Morning Shows in Pakistan have been in the heat for quite a time now. These shows have surpassed every level of creating stereotypes from mocking the Balochi people, subtly making fun of the short-heightened people and holding queer ‘Maasi # 1’ competitions. As if that was not enough, a Hum tv morning show hosted by Sanam Jung recently telecasted a brownface makeup competition.

So how it went was that it basically was a makeup competition, and on the third day of which the participants were introduced to a new challenge. The task was to create a brownface look on their models by using a dark ‘negro’ foundation.

The models in the competition were not dark skinned girls but rather they were first painted with a ‘negro’ foundation to look dark and then the participants were asked to make the girls look beautiful while wearing the chocolate color foundation.

The result of this bizarre makeover was as cringe-worthy as you can imagine. As a cherry on top, the host and the guests continuously used words like ‘habshi’, ‘habshan’, ‘Makrani’ and ‘Negro’.

What’s more shocking is that a platform like Hum TV which plays the role of the building block for the revival of Pakistani Entertainment industry aired this show.

It’s really upsetting to see these shows coming up with ideas this disrespecting and extremely inappropriate. Coming from a host like Sanam Jung who is well educated and sometimes airs shows which have a nice and deep discussion topic, we cannot help but join the pool of people condemning this show. However, are we, as a society, really concerned about this? Aren’t we too busy blocking our roads for entertainment purposes?

The producers of the show probably had run out of ideas and created this theme to consume the audience but this backfired them brutally. Sadly, the idea that this episode of the show delivered is that life is difficult for people with dark skin tones and girls who have a dusky shade can look beautiful only with makeup.

The truth of the matter is that the morning shows today have only one motto and that is to reign the ‘world of ratings’. And to achieve this purpose they have hit every low and crossed all the limits.

What we as viewers need to understand is that condemning when the damage is done is not going to stop all this drama but rather just prove that we do not care enough to make a move. It seems that we, as a society, like to ignore racism in Pakistan whilst it stares us in the face. The best way to denounce these nonsensical shows is to stop watching them. Because there is no way we are getting good content back.

Do You Need A Prescription For Atomoxetine In Canada * Pharmacist...